The Huasco River, that ties together and gives life to the terraced valley of the same name, has attracted a variety of settlements along the shores of its long course, with the city of Vallenar situated in the heart of the valley. When Vallenar began to take shape as a city, the river was not seen as a space to be integrated in this urban environment, where there was already a serious scarcity of green areas and parks for recreational use. In the mid-1990s, the city government decided to develop a project to address this issue.

The project’s aim was to take over the river space as a basic part of a new urban development plan that would encourage the use of its banks as a place for social gathering and recreation, ridding the riverside of its image as an abandoned space.

Incorporating the river into the city meant setting aside a public space in which citizens could gather and interact, that would respect and foster respect for the environment, promote outdoor cultural, sports and recreational activities, and attract tourists to the area.

The specific aims set out by the designers of the riverside promenade were to:
a) Channel the river, reinforcing its banks with stone abutments in order to protect against the rises in the river.
b) Order the riverbank using walls built out of natural materials.
c) Use river water for the park watering system.
d) Place sports courts of various types along the edges.
e) Rehabilitate a series of natural pools to create a spa for people in the community.

That is how a multi-purpose green space of over two thousand linear meters complete with sports and recreational equipment was created, offering the entire community a broad range of outdoor leisure activities.

From the outset, the community participated in this ambitious project to transform the riverside, providing input on the initial plans and, at the same time, gaining awareness of the importance of the surroundings and of respecting the environment. As the work progressed on the project, citizens were able to voice their concerns and needs directly to the municipal authorities.

Today, the Huasco River, newly-revived as the central core of an ecosystem and integrated in urban life to the citizens’ benefit, is a focal public space in the City of Vallenar. 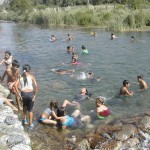 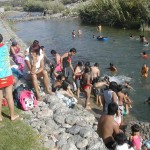 The city must guarantee quality of life for all its inhabitants. This requires creating a balance with its natural surroundings, providing the right to a healthy environment, as well as the right to housing, employment, leisure and public transportation, amongst others. At the same time, the city shall actively promote health education and the participation of all its inhabitants in the best practices of sustainable development.