Sports as an instrument of social inclusion: the city of Guadalajara

Public space is where a horizontal and broad communication can be established among citizens. It is a place that generates democracy, culture and education. Experiencing the city offers the opportunity to continue building it and restoring it to revive the values of each of the communities within it.

La Vía RecreActiva—Recreational Route— is a program developed by the City of Guadalajara (the capital of the Mexican state of Jalisco) with the primary aim of improving coexistence, communication and social cohesion among its citizens.

The route extends 25 kilometers along the length of the city’s main avenues and crosses the city from east to west through numerous communities of varying socioeconomic levels. It also connects with three other cities in the larger metropolitan area: Tlaquepaque, Tonalá and Zapopan.

The Recreational Route involves freeing some of the city’s main streets of traffic on Sundays, turning them into recreational areas where pedestrians can ride bicycles, skate, walk and enjoy educational and entertainment activities offered in the nearby squares. An average of 120,000 people use the route every Sunday.

The municipal government’s aim in creating the Recreational Route, is to recover public space, foster democratic values and mutual respect among citizens, promote social action, create an inclusive space and a sense of belonging to the city, and encourage alternative means of moving around the city.

The use of this route has also led to programs focused on improving the urban landscape, as in the case of San Jacinto Park, a recovered green space more than 25,000 square meters in size, and the “Green City” Project for developing green areas on the sidewalks along the city’s Route 1.

The use of public space as an instrument for social inclusion has extended to other projects such as “Guadalajara on a Bike” and “Sports in the Street,” the latter of which organizes sporting events in Guadalajaran communities that have no sports infrastructure.

These initiatives always take into consideration how, why, and for whom they are being carried out. The city does, and must, belong to its citizens. 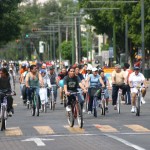 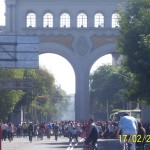 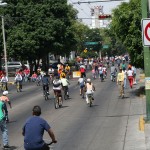 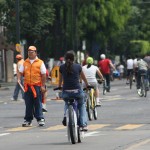 The organization of the city’s physical urban space shall meet the requirements of accessibility, encounter, relations, play and leisure as well as a greater closeness to nature.