Historic memory and identity: the city of Granollers

In order to know and understand a city and certain attitudes of those who live there, it is necessary to appreciate the sum total of its symbols, legends and customs. This intangible heritage can be moving and evocative at the same time that it reinforces a sense of belonging to a city. In addition, a community’s collective expression of its identity can serve as a tool for building citizenship based on democratic values and for fostering dialogue in conflict resolution.
The City Council and the people of Granollers–a city in the Barcelona metropolitan area with a rich industrial history–are well aware of this.

MAY 31, 1938: THE BOMBING OF GRANOLLERS
Seventy years after the city was bombed during the Spanish Civil War, high school students and their teachers gathered together with survivors of that tragic event to commemorate it and to make a clear statement of commitment to peace. Since then, this event has been repeated every year. Peace is not just something to be preached, it must be built.

THE CITY’S FESTIVAL OF THE “WHITES” AND “BLUES”
The city of Granollers’ main annual festival was created around an age-old competition between two tile makers to see who was the fastest at his job. That anecdote served as the inspiration for the recreation of an invented rivalry among two heterogeneous groups of citizens–the whites and the blues–that carry out a friendly competition to win the right to organize the opening ceremonies for the following year’s festival.
The competition revolves around a program of activities aimed to strengthen the sense of belonging to the city and to encourage an encounter between long-standing tradition and contemporary innovation. This city festival is a confirmation of the creation and transmission of a legacy.

THE GRANOLLERS SOUP POT
In 1982, the Neighborhood Association for downtown Granollers suggested reviving and updating an old tradition known as L’Olla dels Pobres (Soup Pot for the Poor). Ever since then, on the Saturday before Christmas, the association invites the people of the city to a bowl of escudella (a traditional Catalan stew) in a centrally-located downtown square called, most appropriately, Soup Pots Square. In addition, association members visit the schools to teach young children about the tradition.

People were so taken with this unique cultural event that citizens later got together to create a monument to the escudella. Since then a cooking pot is permanently stored beneath the square and is brought out for the city’s main culinary festivals. The popular saying, “Granollers is a grand soup pot” is an apt reflection of the city’s tradition of hospitality. 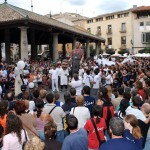 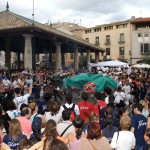 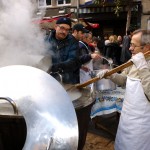 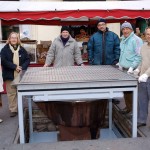 The city must know how to discover, preserve and display its own complex identity. This will make it unique and provide the basis for a fruitful dialogue with its inhabitants and with other cities. Its customs and traditions must be compatible with international ways of life.