Conflict resolution: the city of Bethlehem

Bethlehem is located in a region that has been wracked by violent conflict for many years. It is a city of great social diversity; of profoundly different political convictions and religious beliefs coexisting in the same space.
Bethlehemites use their differences to strengthen their mutual understanding and respect as a way of building peace, harmony and solidarity.

The Bethlehem Municipality plays a basic role as a mediator in solving the social problems within the community of Bethlehem. To that end, the Municipality has a committee composed of members of the City Council which is entrusted to follow up and mediate in the day-to-day problems and conflicts that arise among citizens. The City adopted these procedures in conflict resolution as a supportive measure to guarantee the security and the stability of the community.

Beyond the City’s action, the social structure of Bethlehem also includes conciliators who intervene in conflictive situations or attacks on personal honour. Their judgments are based on traditions and customs handed down by elders from generation to generation. The rules operate as real social laws regulating the relationships between families and clans. It is not the isolated individuals who are subject to legal responsibility, but rather the social groups to which they belong.

These mediators are appointed by the elderly, whose wisdom is recognized by the social entities and the Bethlehem city council. The conciliators are not substitutes for the legal authorities; instead, their involvement is seen as an element that reinforces social stability. They work together with government agencies to maintain peaceful coexistence between the different social sectors in Bethlehem.

Another important means of administering justice in Bethlehem is through application of the tenets of the Islamic Religion, widespread in Palestine due to the long history of nomadic and immigrant populations in the region.

These systems of justice, to which people can directly relate, carry on ancient formulas for redress of grievances.

The traditional code of justice in effect in Bethlehem is a clear example of how the most everyday conflicts in the city are resolved. Incompatible goals or different perceptions between individuals or social groups require the presence of a third party capable of fostering peaceful coexistence.

Justice mediation, the application of traditional wisdom and the City of Bethlehem’s initiative are the best guarantees of respect and social peace. 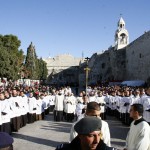 The city will promote education in diversity as well as understanding, international solidarity and cooperation and world peace. This is an education that fights against any form of discrimination and fosters freedom of expression, cultural diversity and dialogue in equal conditions.