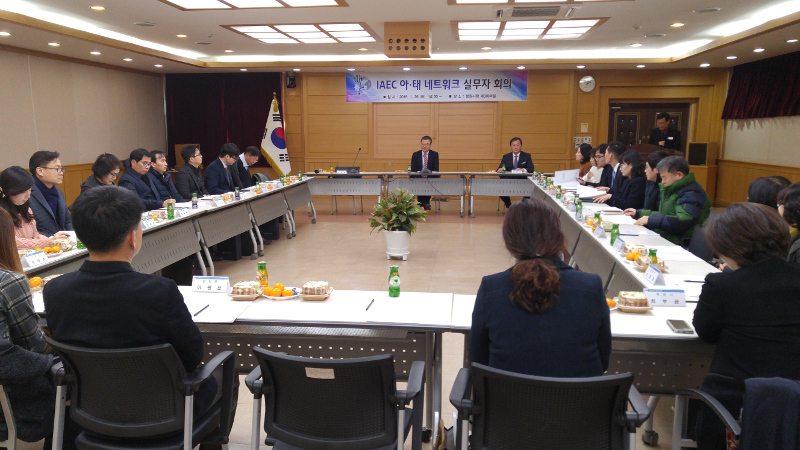 30 officers and representatives from 18 member cities attended the 2016 IAEC Asia-Pacific Network Working-level Meeting which took place on January 26, 2016, in the Changwon City Hall.

The event was also attended by the city of Geochang-gun (Busan), which joined the Association early January 2016

As coordinating city of the IAEC Asia-Network which consists of 28 cities from 6 countries, Changwon presided over the meeting, and asked for proactive participation of IAEC member cities in Korea in the upcoming 14th IAEC Congress 2016 to be held in Rosario, Argentina from June 1 to 4, 2016.

Moreover, Changwon officials presented details about the Changwon -UNESCO joint meeting to be held in Phuket from May 9 to 11, 2016, which is the first of its kind for local governments, to encourage the participation of IAEC member cities in Korea and promote IAEC to representatives from many cities in the Asia-Pacific region, thereby enhancing the standing of Changwon as the city of international tourism.

In the meeting, 32 officials from 11 IAEC member cities in Korea expressed their will to attend the forthcoming IAEC Congress hosted by Rosario, and requested that the 8th Asia-Pacific Regional Network Conference be held in Geochang-gun, Korea, in connection with its hosting of the Korea Lifelong Learning Expo.

Mr.Lee, Yongho, an Executive director of Office of Planning and Budgeting from Changwon city, attributed the success of the 7th 2015 IAEC Network Regional Conference to active participation of Korean member cities and avowed that Changwon would play a central role in communicating and cooperating with member cities for continued development of the IAEC Asia Pacific Network.